Amanda Alcántara is a Caribbean writer, journalist, and voice actor. She is the author of Chula and How I Became a Mermaid. Her work has been featured in the anthology “Latinas: Struggles & Protests in 21st Century USA,” the poetry anthology “LatiNext,” Rolling Stone, The Huffington Post, Latino USA, Remezcla, and other publications. She is also a co-founder and previous editor of La Galería Magazine.

In 2021, Alcántara began voicing audiobooks in English and Spanish, starting with providing the voiceover for the Spanish translation of The Hill We Climb by Amanda Gorman. She recently won an Earphones award for her narration of Pilar Ramirez and the Escape from Zafa by Julian Randall. Amanda is also the host of the Spanish-language podcast, Radio Místico. She is currently searching for a literary agent and enjoying spending time with her puppy, Bruno. 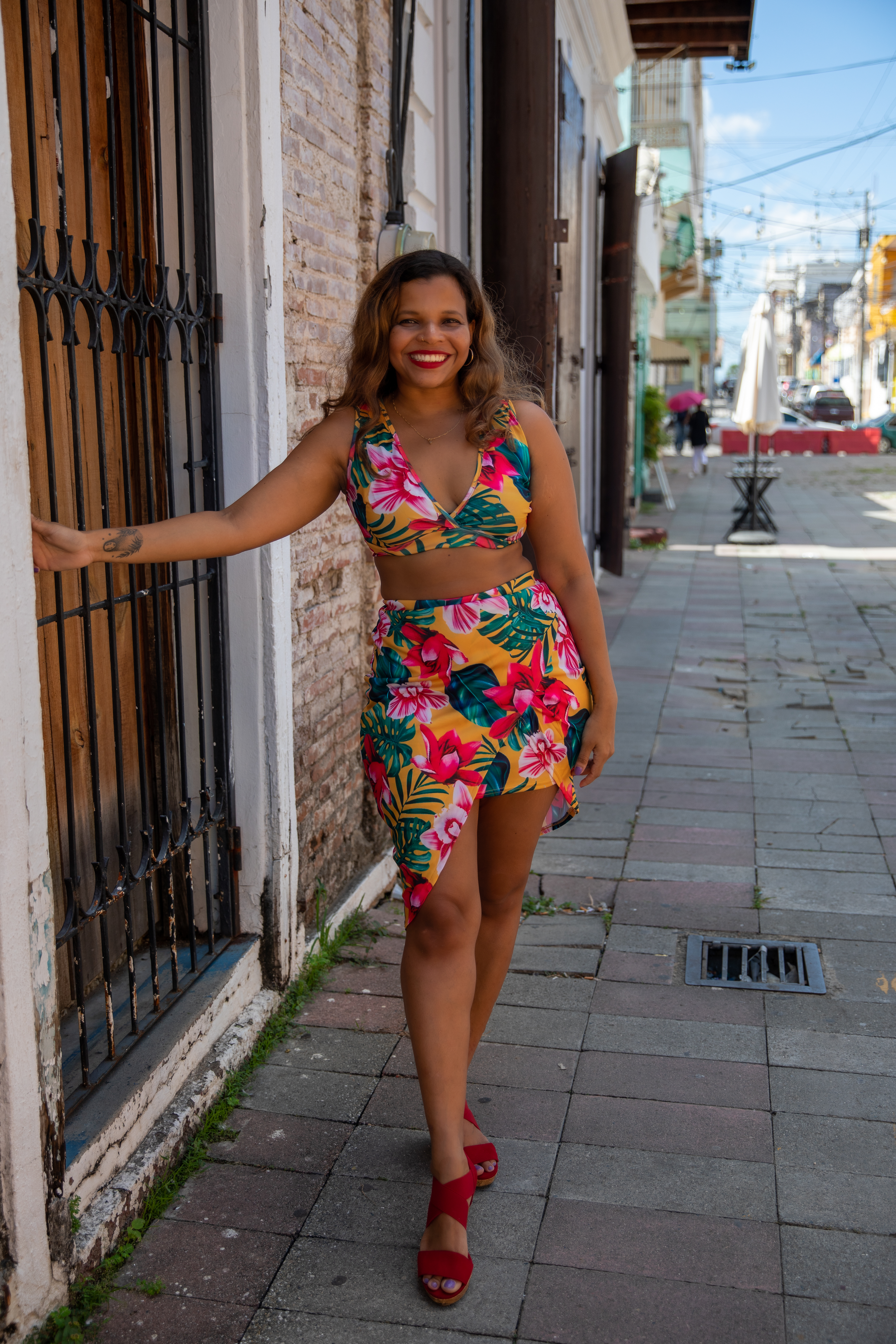 Amanda Alcántara is a Dominican-American writer, performer, and journalist. She is the author of Chula and How I Became a Mermaid. Her work centers on various themes including Caribbean culture, womanhood, biculturalism, borders, race and an exploration of the self.

Her writing has been published in the 2020 anthology The BreakBeat Poets Vol. 4: LatiNext published by Haymarket Books—a collection edited by Willie Perdomo that celebrates the embodied narratives of Latinidad— and in Latinas: An Anthology of Protests and Struggle in 21st Century USA published by Red Sugarcane Press in 2018. Alcántara also lends her voice for the Spanish translation of Amanda Gorman’s audiobook, including the translation of Gorman's 2021 U.S. presidential inauguration poem The Hill We Climb. Since then, she has recorded several other audiobooks and recently won an Earphones award.

Alcántara includes theatrical performance in the readings of her poetry and creative writing, and has performed in stages like the Apollo Theatre, The Schomburg Center for Research in Black Culture in Harlem, the United Palace and universities across the U.S. including Harvard and Dartmouth. She has also performed in the cities of Paris, Santo Domingo, Havana, among others.

Her journalism work and opinion pieces have been featured on Rolling Stone, Esquire, Oprah, Refinery29, El Diario, Latino USA, The San Francisco Chronicle, The Washington Post’s The Lily, Remezcla, The Huffington Post, Democracy Now!, PIX 11 and others. She has also been featured on listicles of “Latinx to follow” on social media on Latina magazine and The Huffington Post, and was profiled by Cosmopolitan. In 2017, she read an open letter for a PSA series on Vice TV.

Alcántara was the previous Digital Media Editor of Latino USA, a national radio show and podcast then-released on NPR. One of her stories on the #MeToo movement was highlighted in Times Magazine end of year 50 podcasts recommendation, saying, one of the podcast’s “most effective recent episodes explored one reporter’s personal struggle to reconcile her love of Junot Diaz’s work.” The Los Angeles Times also recommended the podcast episode saying, “The headlines don’t quite do the [#MeToo scandal] story justice — what does, is this story by Latino USA.”

In 2019, Alcántara independently published Chula, an imaginative bilingual collection of intimate poems, short stories, memories and vignettes about the life of a Dominicana before and after moving to the United States. Though independently published, the two-night release event for the collection was sold-out, and the book was number #2 most sold of the year at Word Up Books in Washington Heights.

Chula has also been praised by People en Español, Remezcla, Hip Latina, and countless blogs and Instagram pages including Mixta and Latinx Reads. National Book Award winner and author of The Poet X Elizabeth Acevedo praised the book, saying, “Alcántara’s Chula sings with ferocity and wit.” In 2022 she went on to publish "How I Became a Mermaid" which is still receiving critical acclaim, and has been profiled by platforms such as Al Día News and selected as the book of the month of July by the Dominican Writers Association.

I am a Caribbean palabrera living in Spanglish. A wordsmith making a name for herself between two worlds, using the written-word and theatrical performance as tools to confront a society that tells me to be less. That is less loud, less outspoken, less sexy, less black, less immigrant, less visible, less me.

In 2014, Alcántara co-founded La Galería Magazine, a magazine celebrating the Dominican Diaspora. As the magazine’s Editor in Chief she edited hundreds of articles, and facilitated dialogues on race, gender and immigration. Alcántara’s work at the time centered on activism and reimagining a Dominicanness that is diverse and inclusive. The magazine concluded its work in 2019, following the publication of a print edition highlighting the works of dozens of Dominican creatives, from poets, activists and opinion writers to photographers, designers and visual artists.

Alcántara has a Bachelor’s degree in Journalism and Political Science with a minor in French from Rutgers University, and a Master’s in Latin American and Caribbean Studies from New York University.

Amanda is currently a CUNY Dominican Studies Institute Research Fellow where he work focuses on exploring myths and legends of the Dominican Republic. She chronicles some of her findings on the podcast Radio Místico. Alcántara is a Libra who loves exploring nature, being close to the sea and playing with her dog Bruno.